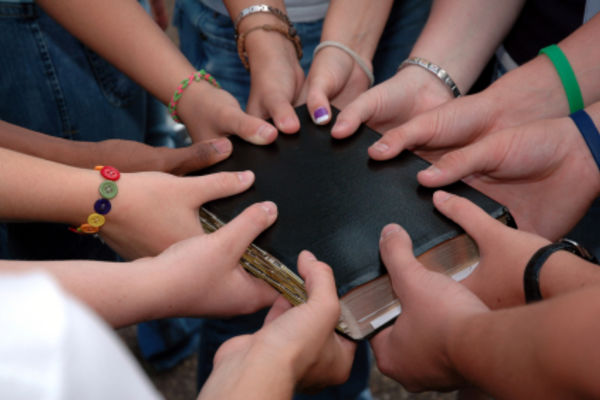 Viewing the Bible as God´s infallible word has not been invented by human beings, but is actually the Bible´s own teaching about itself.

The Christian faith has originated in revelation. If God had not chosen to reveal Himself, then human beings would never have known Him. Man can never know more about God than what God chooses to reveal. If man knows everything about God, then man is greater than God. All available knowledge about God is solely due to God´s choice to reveal it.

God also reveals Himself through miracles, that reveal God´s special power and presence.

This divine revelation has been recorded in writing. So there are two words: The incarnated God´s word, Jesus Christ, and the written God´s word, the Bible. It is the written God´s word that reveals the incarnated God´s word for mankind. The Bible is therefore God´s own word. When we say that the Bible is God´s word, it does not matter whether the authors of Scripture received their information by direct revelation from God, as it is in revelation, or if they researched the matters such as Luke, or if they received knowledge from external sources, legal documents, or even from reports from others. The question we must ask is whether what they wrote is reliable. That leads us to the doctrine of the inspiration of Scripture, which is what the Bible teaches.

The doctrine of inspiration can be defined as the Holy Spirit´s inner work in the heart and mind of God´s chosen servants, who wrote Scripture so that God was able to record what He wanted to communicate.

The Bible is in its totality God´s written word to man. The word has no mistakes, and is perfectly reliable in matters regardng history and doctrine. Regardless of how little the authors might have known, and regardless of how many mistakes they committed while they wrote the Bible, still the Holy Spirit ensured that they did not commit mistakes when they wrote down the words of the Bible - including facts, history, science etc. The Bible does not portray itself as a text book in history, science, or mathematics - but when Scripture speaks of matters regarding such disciplines, then Scripture will match the truth.

The inspiration covers all parts of the written God´s word, and even is active in the choices of words and texts of the Bible. The authors of the Bible retained their own literary style, and the Holy Spirit monitored the authorship so that the end product was God´s own product. Exactly as Jesus had a human and a divine nature - one is truly human and the other truly divine - so it is with God´s word that carries the marks of being both truly human and truly divine.

Inspiration means infallibility from beginning to end. God the Holy Spirit cannot lie or be the source of untruths. If Scripture is inspired at all, then it has to be infallible! If a part of Scripture is not infallible, then that part cannot be inspired. If God´s inspiration opens up the possibllity for mistakes, then inspiration ceases to be inspiration.

When the Bible speaks about its own reliability, no limitations are expressed. There is no indication that certain parts of Scripture are unreliable, while other parts are reliable.

WHAT THE BIBLE SAYS

Where does this dictrine of inspiration and infallibility come from?

The answer is that this is a doctrine that is rooted in the Bible.

The clearest claim of inspiration comes from Paul in 2Timothy 3:16-17:

«All Scripture is given by the inspiration of God, and is profitable for doctrine, for reproof, for correction, for instruction in righteousness, that the man of God may be complete, thoroughly equipped for every good work».

«For prophecy never came by the will of man, but holy men of God spoke as they were moved by the Holy Spirit».

«when you received the word of God which you heard from us, you welcomed it not as the word of men, but as it is in truth, the word of God, which also effectively works in you who believe».

"«f anyone thinks himself to be a prophet or spiritual, let him acknowledge that the things which I write to you are the commandments of the Lord».

In Galatians 1:11-12 Paul maintains that his message does not come from man: «it came through the revelation of Jesus Christ».

In the Old Testament the authors claim more than 2000 times that the words they express are given directly by God. The expression «thus says the Lord», or similar, occurs often. Dozens of prophecies about Christ were fulfilled in the new testament age. Even archaeology confirms the durability of the Bible.