This prophecy was conveyed by Chuck Pierce during the Pentecost Conference that was hosted by Pastor Torp in June 2003 at Clarion Royal Christiania Hotel in Oslo. 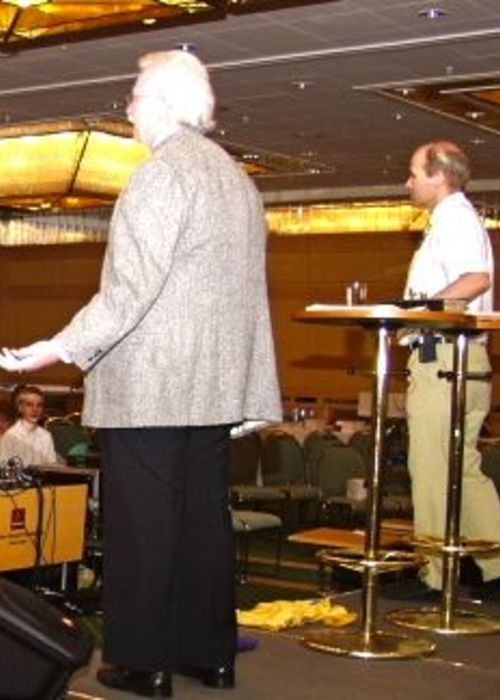 “There is a deep river here that I am ready to bubble up, and i am ready to allow the river of life to rise through the midst of the words of death that have been released in this nation.

I say: I am ready to restore this mantle, and the mantle has been stained and burned. So the Lord says: I won’t just patch up what was, I am going to press you through to receive a new one.

And the Lord will say: This will begin to be recognized, and a new preaching anointing will start rising up in the churches, but a liberation is going to come to the body again so the gifts that are deposited in the body can begin to be released. It is important that these gifts be released now, for I am ready to restore the prophetic mantle in the workplace, says the Lord. There will be a move of God in the workplace in Norway, says the Lord.

So I will say to you: I am restoring the mantle. Lay down your preconceived ideas of what it looks like, receive this new mantle, be willing to wear it, be willing to become very skillful with it, for I am going to create a move of holiness in My church, and from the move of holiness that is coming through My church in Norway, you will only be able to prophesy that which is holy.

I say: I am rising up the prophets and I am aligning them with the apostles, and many pastors will begin to prophesy, and this will become a nation that learns how to be skillful with revelation.

I say: Now is your time, don’t miss this window. It will only be open over you over the next 18 months.

I say: Begin to pray in a way that I come down and interact in the midst of your prayer life. I say: Be like Job and pray for those that have abused and even broken covenants, and when you pray like Job prayed to restore his friends, I will enter into this nation and begin to restore relationships. I will be able to do what you never could do. So mobilize prayer to pray for the churches, mobilize prayer to pray for the cities of this nation, and watch restoration begin.

For it is important that this mantle be fully restored in the next 18 months. This is a new day in Norway and I am releasing a call to you, to pray the prayer of faith, to overthrow the opinions of man, and to move into that which I have destined you to be at this time.

And the Lord would say to Norway: This is a time, even though there has been a network of clouds that have stopped My revelation from coming, I would say to you: Now is the time of the breaking of the day. For I will say to you: A new day is dawning on you, and have I not said that I set the dawn in place? And because I determine dawn, I say now: Go into a place of watching for the breaking forth of this new day.

I say: Don’t fear the storms that are ahead, for it is not the storms that I want you to watch for, but it is that which I want to come and even bring across you, and bring new riches to you through. The wave of My Spirit is stirring deep, says the Lord. And deep calls to deep. So if you will watch until the day breaks, the wave of my glory will begin to cover and even spread on this land.

I would say: Even though darkness has dwelled on your horizon, I will say: I am calling you into a prayer of faith that will cause the dark forces to resign.

But I say a new rock of revelation is rising in the midst of Norway. And I am ready to build the church in a new fresh way. So I would say: The old foundation is being eroded, and this is a time for you to cry out for the heavens to open. And if you will do that, I will build within this nation, and the gates of hell that have surrounded you on the horizon, will not be able to confine you, but the gates of hell will give up and the gates of hell will open and My Glory will flood this land, says the Lord.”

“Change your mind and enter into a new dimension of faith. God is quite able, He is quite able to do all sorts of things.

And then be willing to speak out what He is doing in you.

The enemy will put weights on your spirit, he will weigh you down. He will make you think your burden is worse than any other burden. And God can help everybody else, but He can’t help you.

He will also try to get you into a place of unforgiveness, where you feel that God has done you wrong. You see: If you’re not willing to forgive a person who has done you wrong, you’re really saying that God has done me wrong in this. But this is what happens with unforgiveness, according to 2Corinthians 2: It allows Satan to create a scheme around you. And it allows him to conform you into something you were never meant to be, it allows him to get a root going down in you, called bitterness. And he poisons your spirit.

Another thing the enemy will do, he’ll try to put condemnation on you. He’ll try to make you unstable. If your minds are not lined up with God, you’re unstable in all your ways.

The strongest aspect of the soul in Norway, is the mind. Some places you go, and their emotions are out of control, but it is not like this in Norway.

Here it is important that we start allowing a change to come in, to the way God’s people think in Norway. And that they get sound in their thinking. Because a mind that is stayed on God, He keeps in perfect peace.

God is ready to restore the mantle in Norway. If you hear, give Me your best, change your mind, think like Me. I will give a new mantle of favor.

I would say to you:

I am creating a new vehicle for revival in this land, I will announce today, it will not come the way you thought it would come. And I am saying to you: I am beginning to align things My way for revival.

It is coming, it is coming, revival is coming! Am restoring My mantle and I will say to you; it will surprise you whom I raise up.

I am realigning leadership now and I am raising up the next generation. The next generation will be revived. And I am preparing the leadership to receive the revival that is coming into the youth. It is those leaders, says the Lord, who will be My vehicle of revival in the future. The vehicle is coming out of the factory, and I am about to roll it through this whole land, says the Lord.”