Bishop Bill Hamon delivered this prophecy to Jan-Aage Torp at the annual meeting of International Coalition of Apostles (ICA) in Dallas. AUDIO & TRANSCRIPT! 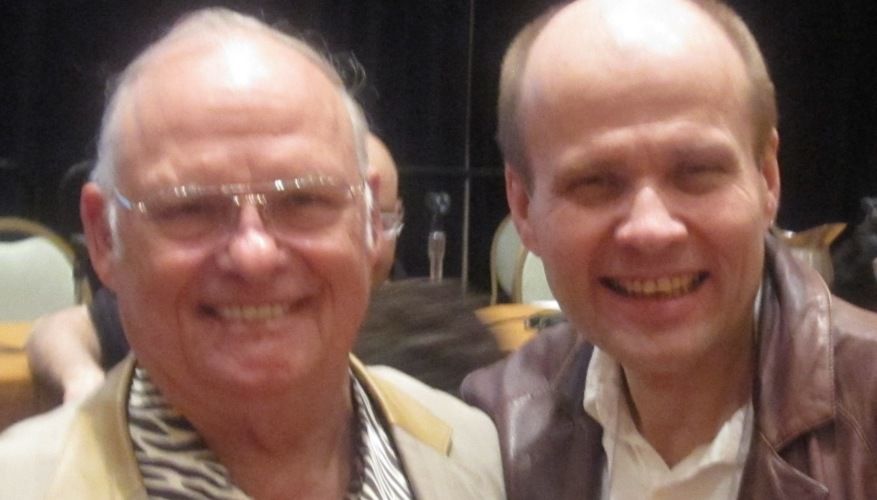 «Father, we just bring Your servant and Your son to You right now.

And the Lord says: Son, I've been working with you, but there have been some forces of hell that have been sent against you. There are some old, lying spirits that for generations have been in that area. I see an old viking god, or something, kind of cruel (???). I see that there's a god that has ruled over that area. A spirit. Antd the Lord says: One reason you went through some struggles, and failures seemingly, and loss, was because there wasn't a strong enough prayer band behind you, and intercessors, a network strong enough.

You went out as one or two to try to win against ten thousand.

And the Lord says: Son, you've tried to do it as best as you knew how, with the grace you had and the wisdom you had. But now new grace, new wisdom has been given. And now you'll build with my pattern. Now you'll build with my authority. So don't try to go back and feel responsible for doing it by yourself. Your responsibility is to raise up an army. Raise up qualified, capable people. Committed and dedicated to the cause of the Kingdom of God. And don't be bound by old tradition. Don't be bound by some people's fooloish revelations and new foolishness. And you will find wisdom and grace in moving ahead.

And the Lord says: I'll let everything else fall apart so that I can put together the new order new thrust. And when you come into this new order and new thrust, it will be partly business, partly ministry, partly marketplace, partly intercession. It's going to be a mixture, a conglomeration of all the thruths you've heard here this week and that God's been dealing with you about. And as you do THIS, and you move in THIS, then success will begin to come. You'll begin to become the apostle I've called you to be, with prophetic perspective. You'll begin to get the recognition and the favor, and things will begin to work.

But the Lord says: I'll let the old be destroyed so that the new may be established. And it's not a hundred percent new. It's just some tweaking that had to be done. Some things - readjusting, realigning, and visionary understanding of what I'm doing.

So the Lord says: I have called you. I have ordained you. I have purposed you. And you have not failed me. I have allowed you to go through that process. You didn't lose anything. That was the tuition I paid for your wisdom and maturity - for the greater work I'm going to have you do in days to come.

So therefore I love you too much to let you do less than the best. And be right with me.

So go back with new vision. Go back with new assurance. I'm with you, I'm for you. I've called you. And you have yet a work to do in your nation and in that area, says the Lord.

I'm with you for advancement and for My Kingdom, and you're going to have such a passion for My purpose and My Church and My Kingdom that the «My!» in you will turn to be thre «My!» in your God. working throughout your spirit and system.

So go forward! And I'll accomplish My work and My purpose through you. And you'll know

it's not me, but You Lord did it! And it's for Your glory. You'll get all the honor.

You said it before. Now you'll know it by reality and living experience. And you'll fulfill My will and My deal, says the Lord!»