Prophetic Speech through a Newspaper 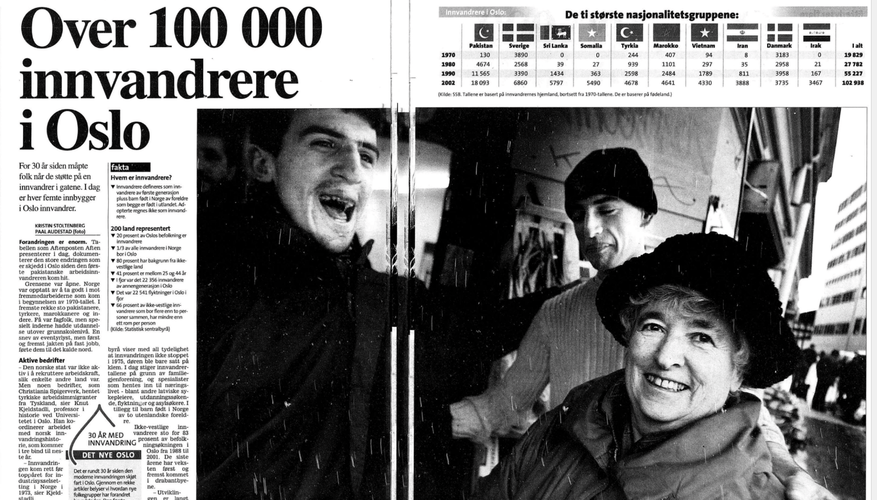 This two-page-spread article in Aftenposten on November 18th, 2002 is framed in a picture frame and hangs on the wall of Jan-Aage Torp´s office. (At the office the picture is in full colors because it is the original paper version which he framed.)

In the afternoon of November 18th, 2002 God spoke to Jan-Aage Torp through the afternoon edition of the newspaper Aftenposten which was delivered as usual in the family´s mailbox in Lillestrøm.

- When I read the introduction to the article, the words hit me with divine force, says Jan-Aage:

«Today every fifth inhabitant of Oslo is an immigrant.»

- God spoke prophetically to me through this text, and said:

- You shall build a church that brings together a total of 100 ethnic groups in the capital city!

- In 2005 we started, and during the next 4 1/2 years we had an exciting development. At times we had people from as many as 26 nations simultaneously in attendance. We had a fortaste of what the Lord one day would do.

- But when tragedy hit my own family, I took a lengthy break because the foundations had been too weak, says Jan-Aage Torp.

- In 2013 Aina & I started Oslokirken again, he continues. - We knew that Oslo had become even more international, and that development had become even stronger. In 2018 every fourth inhabitant in Oslo is an immigrant, says Jan-Aage.

- It has been slow going but that is very good. The best growth is slow. The different seasons are very important for the fruit to be tasty and sound.

- We are building «a Norwegian church for all people groups». Not «a foreign church in Norway».

- That distinction is decisive for Oslochurch to fulfill the Great Commission in Oslo, maintains pastor Jan-Aage Torp. - If there are only a few ethnic Norwegians, then the church will feel «foreign». Our observation is that even our new countrymen want to be Norwegian, and they value being a part of a church that helps them to integrate well, while we also celebrate the wealth that they bring from their countries and cultures of origin.