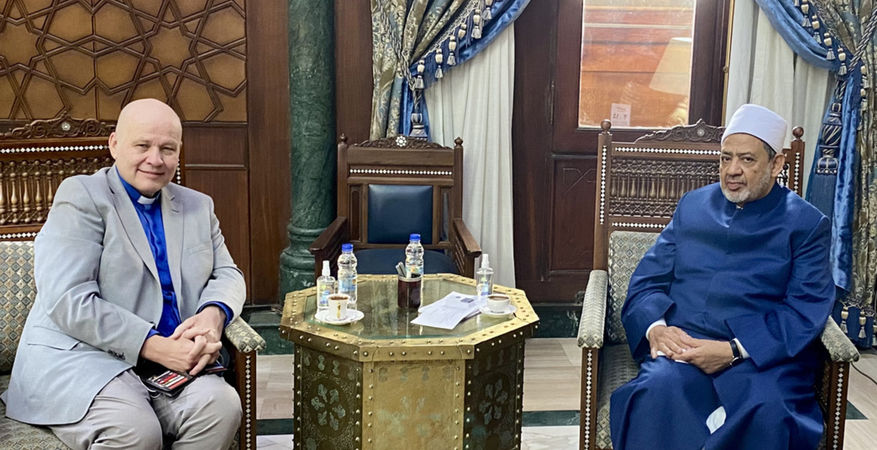 Torp had a meeting with the Grand Imam of Cairo, His Eminence, the Sheikh of Al-Azhar, Professor Dr. Ahmed Muhammad Ahmad Al-Tayeb

Our pastor Jan-Aage Torp is in statutory quarantine after his assignment in Egypt´s capitol Cairo last week. He travelled abroad from Friday to Wednesday, March 12th-17th.

Oslochurch follows loyally all laws and guidelines from both political and health authorities during the corona pandemic, regardless of what we might think about the measures.

Torp tested negative in the PCR test before he travelled, and likewise upon his return. After seven days, i.e. Wednesday, March 24th, he will take a new PCR test, and if it is still negative, the quarantine ends.

According to new orders from our authorities, which were announced and implemented while he was in Cairo, everyone who has been on a necessary work trip abroad, may have their quarantine at home. Torp´s trip was certified by the Egyptian Ministry of Foreign Affairs, which stated that Torp was an official guest of Egypt, and that he was a speaker at the 31st Session of the General International Conference of the Supreme Council for Islamic Affairs, under the patronage of H.E. President Abdel Fattah El-Sisi, President of the Arab Republic of Egypt. Egypt also states that he had a number of bilateral meetings with religious and political leaders in the Middle East.