Chuck Pierce brought a Word to Oslo, Norway and Europe

Apostle-Prophet Chuck Pierce of Glory of Zion & Global Spheres in Dallas, Texas, one of the world´s largest new-wineskin apostolic movements with impact on every continent of the world, brought an epochal word to Norway and Europe when he visited Oslochuch on Wednesday.

Pastor Jan-Aage Torp had received an instruction from the Lord on September 16th, 2015 to invite Chuck Pierce to Oslo to speak a word that would re-establish apostolic foundations in Europe.

In a Lutheran Church

The meeting was held last night in the beautiful sanctuary of American Lutheran Church, which is also the «rented home» of Oslokirken which Aina & Jan-Aage Torp pastor together. The meeting was hosted jointly by Oslokirken and European Apostolic Leaders (EAL), which is led by Jan-Aage. 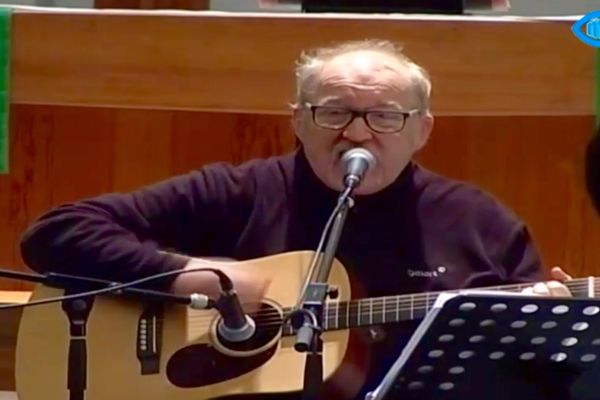 Apostolic leaders from seven Northern European nations were in attendance, plus believers from the Greater Oslo area.

In his welcome, Jan-Aage Torp stated: - Today is a governmental day. This is the day of the annual State of the Union address of the US President, and in the same way there is governmental authority released in Europe today, he said prophetically.

- Norway is a shield nation for the Lord to impart faith and protection for many nations of the world. Right now the enemy is contending over the shield called Norway, So it is very important that there is a movement of God in Norway where the Spirit of God is stirred up and faith starts moving in some incredible way, because the shield of faith quenches all the fiery darts of the enemy. If that is going on in Norway, then all of a sudden that shield begins to form. So this becomes a critical time for Norway, he warned.

It is God´s time!

- My whole role in life is to just go where God tells me to go, underscored Chuck Pierce. - I go because it is God´s time. This is Norway´s time. Her past has to, all of a sudden,  come into a quickening power of faith so that there is a stirring of faith in God´s people, so that the foundation of the Lord´s Kingdom plan, the Church, begins to align in a new way, and so that the nation itself becomes in its decision-making a nation of faith. That is why we are here on January 20th, 2016 to say that this is your time.

- If that new movement does not catch fire, if new faith does not arise. then instead of being a shield for the nations perhaps in all of Europe, you can become the opposite of a shield nation, which is an opening for the enemy to come through. So this doesn´t just become a key time and place for Norway, but for Europe. But don´t worry, for the Lord has two simple words: «By faith!» It will happen by faith, said Pierce.

- If faith will start arising, and prayer starts breaking out, and a new move of God´s Kingdom plan is not only initiated, but increases, then all of a sudden from Norway there will be an alignment that can cause a move of God all over Europe. So this is God´s time! he declared.

All of Europe will shift!

- All it takes is a group who are willing to allow Holy Spirit to baptize them today and re-do the structures that are out there - to go into the economic world, to go into the political arena, to begin to see how their nation and other nations align; to try to move in us in a way that in a moment our past ends, or is reconciled, and our future begins. That´s what this year is about. And that´s what I came to do in Norway.

Chuck Pierce continued: - God really isn´t free to move in the earth realm unless someone decrees what He is saying in heaven, and unlocks it in the earth for it to begin.

- We are in Norway to say that God will connect from heaven into this earth realm that is called Norway and cause everything that has happened in the past to be realigned so that everything that needs to happen in the future will happen. This year there will be a group that find the right place and the right time to «put the stake of heaven» into Norway. Therefore the purposes of God for Norway for the next five years will be released, and what God wants to do will accelerate, and this also represents the shield that Norway is for the nations. There needs to be a move of faith going on in Norway in such a way that the enemy´s plan can not prosper in this nation.

Shield of the Nations 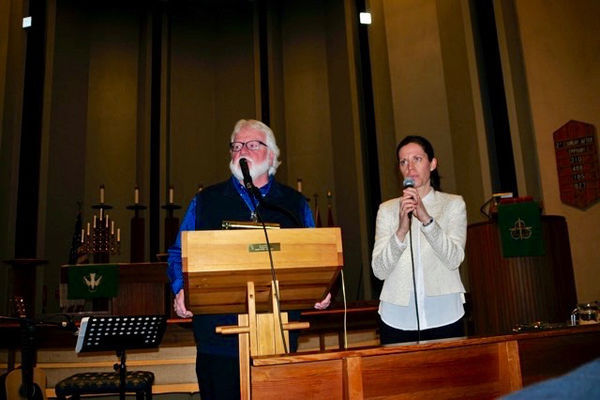 Chuck Pierce translated by Aina Torp (photo credits: Anita Berg-Olsen) - Everything that has been in the past is now realigning in Norway. Our future is being unlocked here in Norway. The best that God has for us in the future is now being unlocked. There is a new anointing for each of us to enter into here under what is called «the shield of the nations». We decree right now that great changes will come this year in Norway. We decree it will be heard worldwide. We decree economies will realign. We decree that from this night forward - on January the 20th - an incredible realignment of nations throughout Europe began.

- Why would Scotland be here and not in Scotland? What in the world is God doing? I think you came from Scotland because Scotland has to determine how it is going to realign. And that wasn´t the same message that God wanted last night (editor´s note: Pierce ministered in Edinburgh, Scotland the evening before, on January 19th). So God brought you here to make sure that when you go back to Scotland you say «Now this nation will make its alignment!»

The Beginning of a New Move

- This is the beginning of a new move of God here tonight. We decree new relationships are unlocked to fullness. We decree that things will happen that couldn´t have happened unless we decreed that here tonight.

- You will come together at harvest time, You will bring the revelation together, how God is beginning to move in this region together. You will bring it before the Lord. In Norway there will be restored the timing of the wave offering before the Lord. And God will look down and unlock the storehouses. I decree new storehosues will begin to form. I decree a great shifting in the economy by the end of April, by the beǵinning- or mid-June, and by the beginning of October. We decree something changing in the atmosphere of Norway.

Chuck Pierce then called Aina & Jan-Aage Torp together to the platform. In a first prophetic act, he gave Jan-Aage a tent peg, and said: 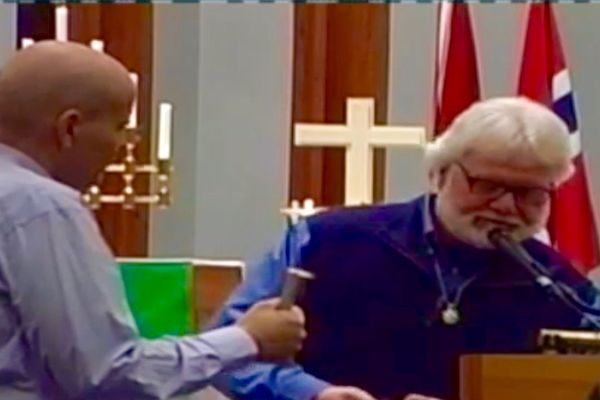 In a second prophetic act, Chuck Pierce draped the Torp couple together in a Jewish shawl, and said:

- I also brought a new mantle and it is filled with embers. The Lord says: I will stir up embers from other moves of God, and even moves that never came to the surface and caught fire. I am going to put this new mantle that represents new authority and new identity on you both. I am going to leave it here in this land and decree that what is lying in the land underneath the surface will now come all the way to be seen by the nations. Lord, we unlock that now in Jesus´ name and we leave a new mantle for a new move of God! We thank you Lord that a new unlocking and a new realigning has begun here in Norway. 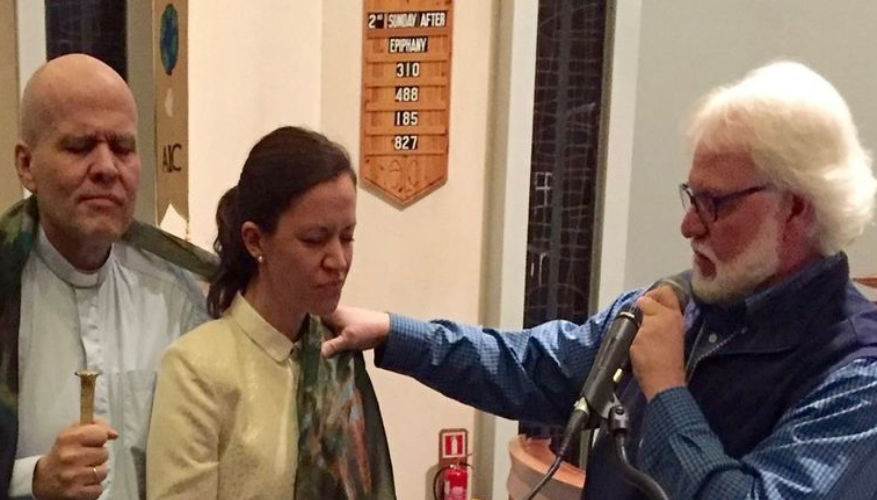 Chuck Pierce draped Aina & Jan-Aage Torp in a shawl as a symbol of a new authority (photo credits: Päivi Heikkilä)